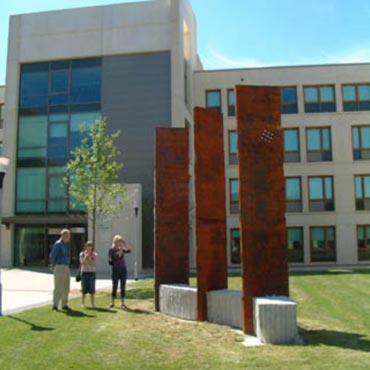 Michael Dan Archer Sited at the offices of the Government Ministry DEFRA, the Inland Revenue and the Regional Government GoEast. Brooklands Avenue, Cambridge. The text on the Cast Iron refers to Gog and Magog, the legendary giants who sleep under the Downs south of Cambridge. They were in love with the river goddess Granta. The river Granta (now the Cam) flows through Cambridge. The cast iron represents the ancient Neolithic standing stones and legends such as Gog and Magog. The granite comes from Quanzhou in Fujian province, China. It is called Tiger skin because of its patterning.

Two irons basically very similar chemically, but physically they are different. Cast iron drain pipes and baths will fracture very easily, they have little ductility. SG iron will 'bend it' like some steel before they break. The answer lies in the shape of the carbon found within the iron. Grey cast iron has about 3% carbon, which makes it look grey and gives it its characteristic name.

Shown above, the carbon appears in a flake form in the iron. Should the iron receive a strong enough wallop the casting will fracture. The fracture line would follow from one piece of graphite to the other in the direction of least resistance. If a crack were to form in a sheet of steel the common practice is to drill a hole at the end of the crack. This hole dissipates the direction of the crack and stops further movement. The same in SG iron, the SG stands for Spheroidal Graphite, where the carbon (3.5-4%) is formed into spheres by the addition of 0.35% Magnesium. The carbon appears as little balls as opposed to flake. Give the casting a wallop and the fracture has no direction to continue as the carbon ball acts as a stop. The base iron bends but the fracture is re-directed up blind alleys and the crack line disappears.

H. Downs & John Booths both produce one off castings that require moulding skills to produce. The only way to acquire these skills nowadays, owing to the advent of college course closures, is to train in house. Both parts of the company employ apprentices to learn by hands on experience. A certain breed of boy or girl who wants to work with their hands, who doesn't mind getting dirty and enjoys the hard work, are encouraged to take part in all understandings of the foundry life and safeguard the future of the company. The course takes three years to complete to understand all aspects of the different techniques and practices associated with producing castings. At the end of the course, working in conjunction with the Engineers Employment Federation each apprentice earns a certificate of competence proving their ability.

The furnace at Huddersfield has always, since 1946, used coke as its method of melting. The coke for the last 20 years was bought from the coking ovens in South Wales. However, cheap imported coke from the Eastern Bloc, China and France forced the closure of the Welsh ovens. The coke is different to household coke both in size 130 -150 mm and texture, which is very hard as it acts as a skeleton within the furnace as it burns. The metal is placed above the coke and as it melts dribbles down through the skeleton into a holding area at the base of the furnace.

As the only British suppliers closed, the imported coke started to increase in price. Out of all the cokes now available the Czechoslovakian coke is the best in comparison to the excellent Welsh coke we had always used, but as the competition decreases the price edges up and up. Our usage is about 20 tonne per month, 25 kg coke melts 250 kg of iron.